Name: PULA FILM FESTIVAL
Headquarters: Uspon na Kaštel 2, Pula
Personal Identification Number: 12904220272
Company registration number: 040180479
Authorized person: Gordana Restović, director
Ownership: City of Pula
Pursuant to Articles 7 and 12 of the Act on Institutions (Official Gazette 76/93, 29/97, and 47/99), the Act on Public Cultural Institutions Management (OG 96/01), and point 10 of Article 36 of the City of Pula Statute (City of Pula Official Newspaper 11/01), the City of Pula Council adopted a Decision on the establishment of Pula Film Festival Public Institution at a session held on December 12, 2002 (Class 021-05/02-01/159, Reg. No.: 2168/01-07-03-02-4 from December 13, 2002).
On January 17, 2003, the Ministry of Culture adopted a Decision establishing that the Decision on the establishment of Pula Film Festival Public Institution is in accordance with the law (Class UP/I-612-11/02-01-01, Reg. No.: 532-03-3/4-03-02).
The establishment of the Institution was register at the Commercial Court in Rijeka on February 18, 2003.
The Institution is run by the Governing Council and consists of the president Jasna Jaklin Majetić and members – Vesna Sajić, Amra Pende, Tamara Brščić and Ivan Nekić.
The Institution is run by a Governing Council composed of five members. The president and three members are appointed by the City of Pula Council and one member is selected by a majority of votes of the professional staff of the Institution from their ranks. Governing Council members are selected for the term of four years.
Public Institution Pula Film Festival status and constitution are determined by the Statute. 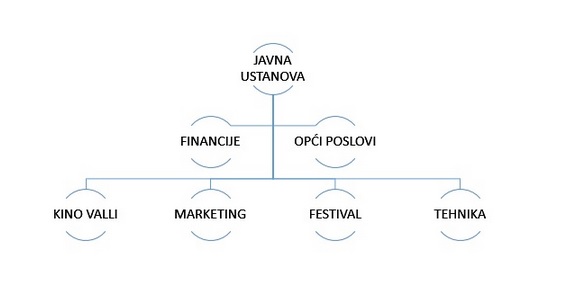